The Longboard vs Skateboard Conundrum

When it comes to skateboarding, there’s an argument that sparks debate like no other: Skateboard vs longboard – which is better and what’s the difference?

Lifelong friendships have been ended over less, but to a layman it may seem unclear what the big fuss is all about. It’s all the same thing, right? Well, yes. And no.

The story of skateboarding and longboarding starts as long ago as the 1940s and 50s, when surfing became a popular sport in California.

By nailing some roller skate wheels to a wooden board, surfers invented ‘sidewalk surfing’ in order to pass the time and hone their skills on dry land whenever ocean conditions were less than desirable. 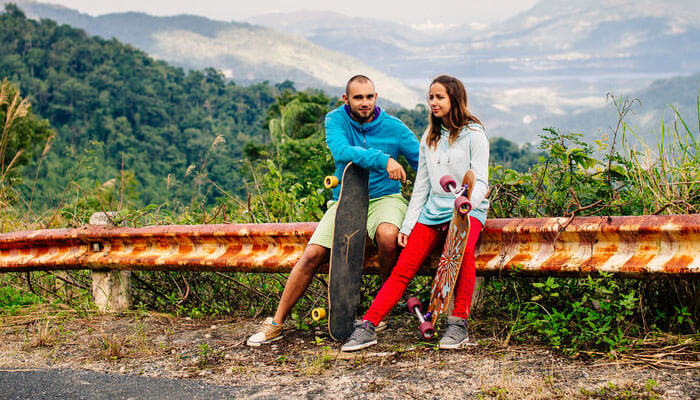 This new fad quickly developed into a sport of its own and continued to gain momentum as time passed.

Today there are millions of people of all ages and walks of life that practice some form of skateboarding and the numbers continue to grow as certain stigmas die out and new people gain access to equipment and facilities.

What’s the Difference Between a Longboard and a Skateboard?

Ultimately, the main distinction between longboards and skateboards is length. There are other contributing factors too, but the most obvious difference is the size of the board or deck that you stand on.

Skateboards tend to be roughly the same length and shape, varying mostly in width, but the sky’s the limit when it comes to longboards, despite the practicality of enormous boards and outlandish shapes.

Longboards vs Skateboards – Every Shape Has a Purpose

Longboards come in a variety of shapes tailored to different disciplines. They include blunt, single kick, double kick, pintail, fishtail, drop through, symmetrical and popsicle as well as anything from coffins shapes to free-form cut-outs of cartoon characters just to name a few.

Every shape has a purpose. A pintail allows you to carve hard, a symmetrical or twin enables the board to be ridden in either direction, while a drop through has a lower center of gravity, which aids in pushing. You get the idea. 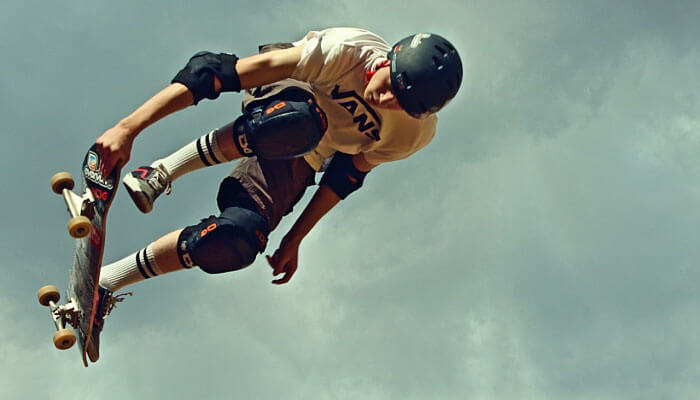 Modern skateboards on the other hand come standard in a popsicle shape, which is symmetrical.

It has two kicktails to enable you to pop ollies and other tricks – crucial skills needed to navigate the streets and skate park. It typically looks like the kind of thing you’d see Tony Hawk skating.

It goes without saying that a longboard and skateboard can both be used for similar purposes, depending on size, shape and hardware configurations of course.

If you put your mind to it, almost any deck can be used for tricks or flatland cruising. Some are just better at it than others, with only a few extreme exceptions. Downhill being one of them.

The Culture of Skateboarders vs Longboarders

Both skateboarders and longboarders are just people in their own right. They might act and dress differently, but in the end everybody just wants to have fun on a wooden plank with wheels stuck to the bottom, despite what some sour grapes might say.

In the longboard vs skateboard argument, most of the opposition seems to come from skateboarders.

Some skateboarders seem to think that the only skateboards you should ride are street/trick decks with hard wheels, designed for grinding, popping ollies, kickflips and vert tricks.

They insinuate that longboarding is soft and unchallenging, but this is clearly not the case.

Yes, it’s arguably easier to just cruise around on a longboard with fat wheels and the wind in your hair, but there are various forms of longboarding that are just as challenging if not more so than skateboarding.

On a technical level few disciplines beat the downhill, freeride and freestyle longboarding disciplines. One could attempt and perfect just as many tricks on a longboard as one can on a skateboard.

In fact, longboards can go many places a skateboard simply cannot, but that’s not the point. The point is to enjoy whichever discipline you choose, despite the opinion of others.

When it comes to the longboard and skateboard comparison, neither is better. Both are great!

More Differences Between Longboards and Skateboards

Despite the size and shape of the deck and the chosen discipline, there are a few other factors that distinguish longboards from regular skateboards. These include: 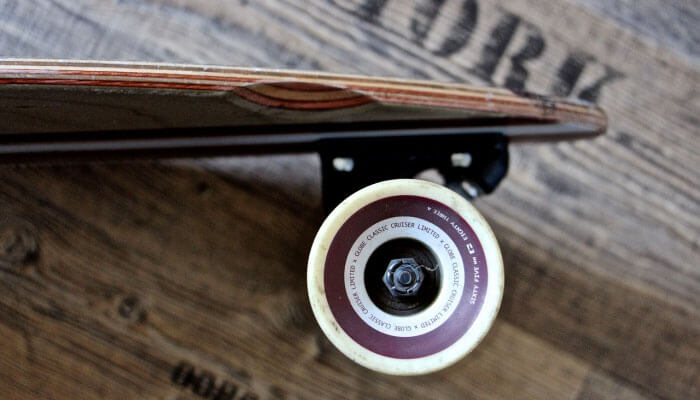 They might not be as fast as the harder wheels prefered for skateboarding, but provide a higher top speed tailored to freeride and downhill disciplines.

Hard wheels are made for smooth, hard surfaces, free of debris. Essentially, the park.

Core placement also varies in longboard wheels. They are available in centerset, offset and sideset, depending once again on the job you need them to do.

Longboard and skateboard decks have differing levels of flexibility, with regular skateboards and downhill longboards being stiffer to maximize stability, while freestyle and cruising decks are more flexible to absorb shock and give a lively feedback to the rider.

Truck orientation differs between a longboard and skateboard. The trucks (the piece of metal that attaches the wheels to the deck) on a skateboard face inward, toward the center of the deck, whereas longboard trucks usually face outward.

These trucks are referred to as ‘reverse kingpin’, meaning that they are mounted in the opposite position they would normally be on a skateboard.

This difference in orientation aids in stability when it comes to the longer length of a longboard.

Standard skateboard trucks are more agile and meant mostly for tricking at the park.

Is Longboarding Easier than Skateboarding?

Depending on which discipline you choose, both can be equally challenging. It’s not easy to do a Caballerial kickflip, just like it’s not easy to bomb downhill at 80 mph.

It all depends on how hard you want to practice and how far you want to push yourself. That’s the beauty of skateboarding as a whole.

However, if you just want to take things casual and simply cruise around town or commute to school or work, a longboard might be a good option, but you’ll still need to hone your skills to stay safe and have a good time.

Should I get a Skateboard or Longboard?

The bottom line in deciding whether to choose a longboard or skateboard is to ask yourself what you would like to do with it, then choose accordingly. It’s really as simple as that.

The best advice I can give you is ALWAYS wear a helmet. 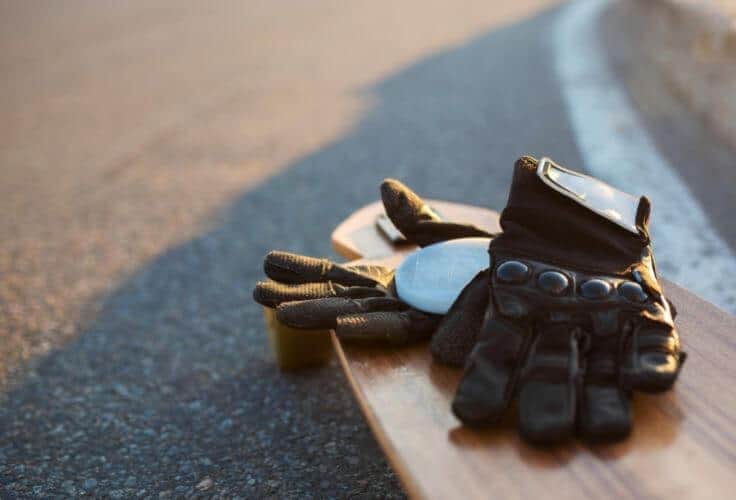 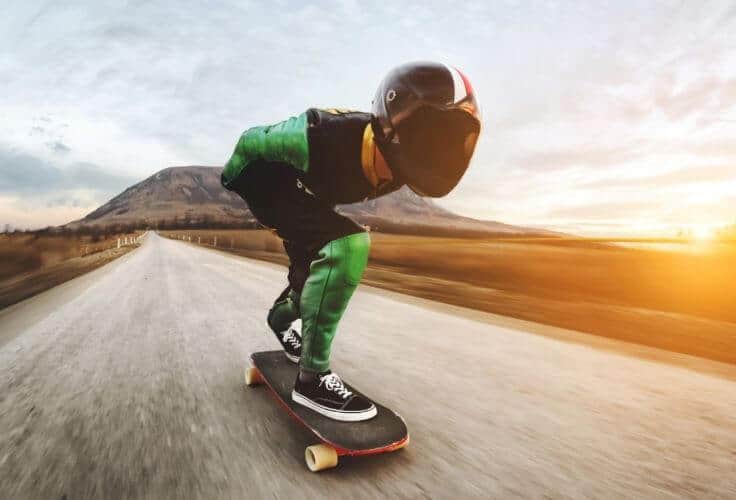 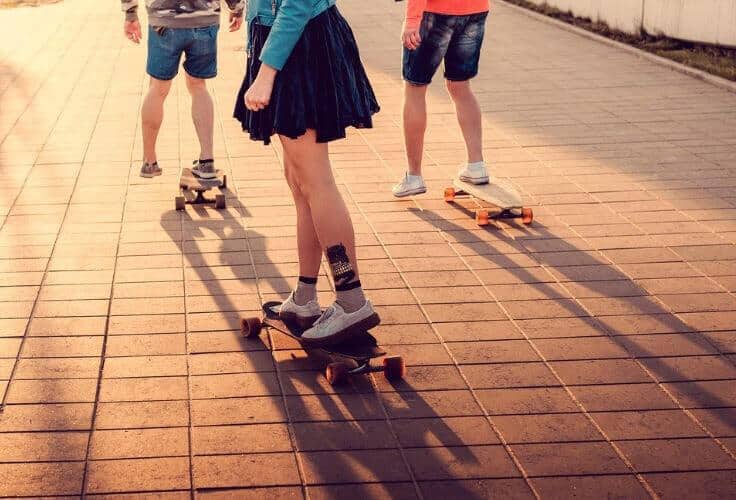 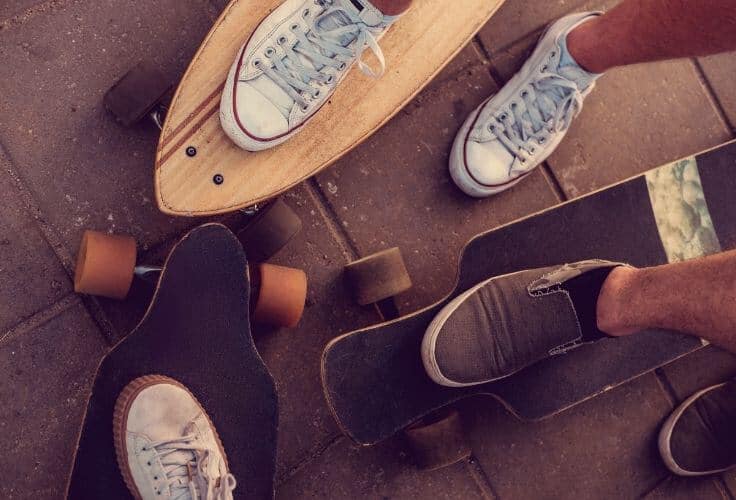